https://youtu.be/7Iu3xgpeZao For Brazilian-born graduate, Daniela Blumenfeld, packing up and moving to Israel, alone, when she was 15 years old was the opportunity of a lifetime. Daniela arrived at Yemin Orde Youth Village in 2003 from Sao Paolo, when … Roi Etenesh grew up in a village in Ethiopia. Today, he serves as a naval engineering officer in the Israel Defense Forces. 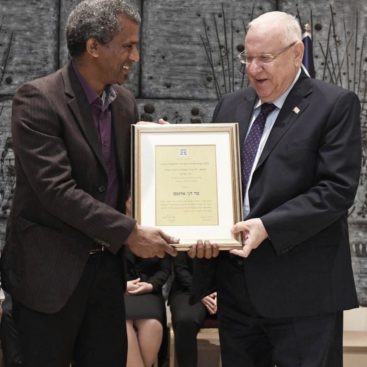 Danny Admasu is one of the most prominent social activists in the Ethiopian community in Israel. From an absorption center in Beersheva to Brandeis University, Endalow Takele, is one Israel’s next generation of leaders. Tamir Temesgen Zalaw lived in Ethiopia, until he was 15 years old. At Yemin Orde, he learned the meaning of life. Yeha’alem Farada emigrated to Israel at the age of seven and dreamed to change the world for others. As a teenager in Iran, Tamara managed to find her way to Israel, alone, in search of a safe haven to call home. Nofar Getanech Desta is certain that “living and learning at Yemin Orde was the best thing that happened in my life”. Sheyla Berkovich immigrated to Israel from Ukraine in 1996. At Yemin Orde, she studied Russian, physics and geography. Today, she serves in the IDF as a soldier in a Combat Search and Rescue unit. Erez Hakiki arrived in Israel as a teen from Tehran, Iran with only a dream for a Jewish life in Israel. Today, he proudly serves as a Major in the IDF. Mkonet Gadamu arrived in Israel in 2001 aboard the lifesaving airlift, Operation Solomon, which transported over 14,000 Ethiopian Jews to the Promised Land. Miriam Ciesler grew up in southern Poland and faced anti-Semitism as a teen. Yemin Orde provided her with a safe home and quality education. Wovite and her family walked across the deserts of Ethiopia and Sudan to reach Israel. She recently earned a Ph.D. in education and is the author of a children’s book about her journey. As Ethiopian immigrants, Israela Tadela’s family faced many cultural difficulties. At Yemin Orde, she received a top education and today is an accomplished role model. Sandro Golis arrived in Israel-alone-as a teen from the former Soviet Union. He credits the emotional and academic support at Yemin Orde for his successes as a young adult. Yitzhak (Itzik) Dessie, is the first Ethiopian-Israeli to receive a law degree. He is known throughout Israel for his leadership and achievements in the fields of civil and human rights. Shimon served as a Member of Israel’s Knesset and, today, is director of a youth village for immigrant at-risk teens. He arrived in Israel from Ethiopia in 1980 with his parents and five siblings. Anton arrived in Israel alone from the former Soviet Union and today he is a successful graphic designer with a bright future ahead. As an immigrant child from Ethiopia, Miri Picado-Aharoni recalls feeling isolated, victimized and ridiculed because of her skin color and cultural differences. At Yemin Orde, she found self-esteem, a caring community and support.